Who was Margaret Whetten?

Margaret Todd was born in New York in 1736. She married a sea captain, William Whetten, who was born in England and moved to the colonies as a young boy.
​
The Whettens lived in New York City but fled to New Rochelle after the British HMS Asia fired on the city on August 23, 1776. Here they found themselves in grave danger as the local Hessian mercenaries had joined Lord Howe's troops.

Because of her knowledge of low Dutch dialect, Margaret Whetten remained on friendly terms with the Hessians. It is reported that a Hessian general protected their house while many other homes were being destroyed. Still, there was an occasional foray. Once, while looking for suspected rebels, the Hessians carried off a cask of cider from the cellar. Another time, a British soldier broke into Margaret Whetten's bedroom to steal her purse. A small battle ensued, and he left with only her snuff box.

Due to her husband's declining health, Margaret Whetten and her family moved back to New York City. It was here, in the occupied city, that he died and Margaret Whetten demonstrated her great patriotic fervor.

Her house was used as a "safe house" by American spies. English Provost Cunningham gave their house the name of "Rebel Headquarters". He even went so far as to call  the Whettens "the damndest rebels."
​
Margaret Whetten, having been well off, lost most of her wealth refusing to convert her paper into hard currency. She is quoted as having said "I will never undervalue the currency established by Congress!"

It's been said that the news of peace was first heard at "rebel headquarters." This information came from a French prisoner who received a letter containing the earliest account of victory from the French Ambassador.

So indebted was George Washington, that he wrote Margaret a letter to express his gratitude on behalf of the country. He also requested to dine with her, so that he might personally thank her for all that she had done.
​
Margaret Whetten died in 1809 at the age of 73. Her final resting place is in the family vault, located in the courtyard of St. George's Chapel in New York City.
​​
​

You can read more about Margaret Whetten and her heroic deeds in this free digitized book. 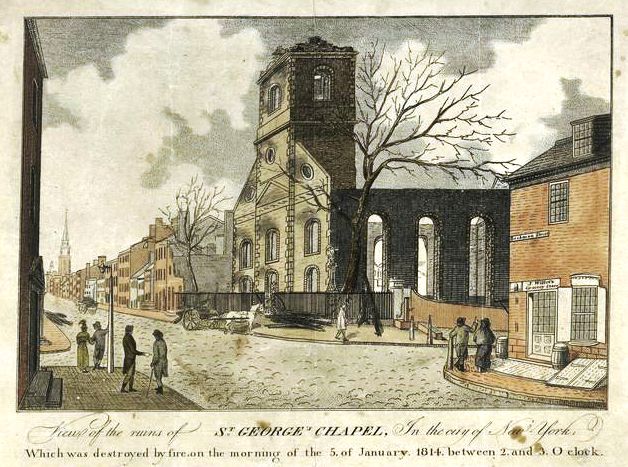 The location of the Whetten family vault. The morning after the fire, St. George's Chapel was a burned out shell.  From the collection of the New York Public Library. (1814)
"The content contained herein does not necessarily represent the position of the NSDAR. Hyperlinks to other sites are not the responsibility of the NSDAR, the state organizations, or individual DAR chapters."